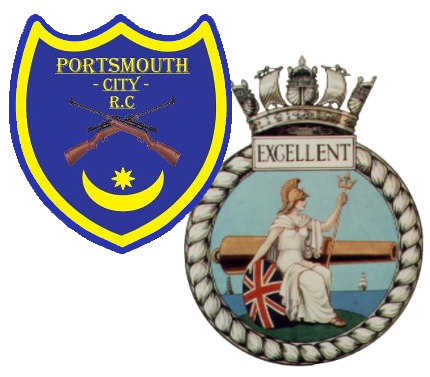 Last Thursday marked City's first match against HMS Excellent in a few seasons, after HMS Excellent A were promoted to Division 1 at the end of last season.  It was a home match and here were the scores:


So City finally gets a win on the board although the team average wasn't helped by this match and we can only hope that we bring our A game again next week's rivals - Havant.

It was great to see HMS Excellent again in Division 1 and we look forward to the away match on the Tipner range later in the season.
Posted by Gordon at 22:17 No comments: 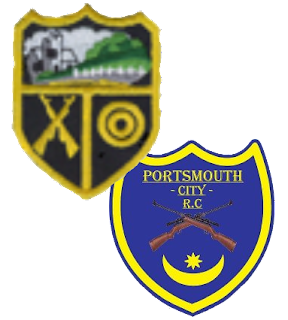 City's shoulder-to-shoulder season had a bit of a misstep last week as our first match, a home match against Chichester, had to be cancelled at the last moment due to a particularly nasty traffic accident on the A27.  We'll reschedule that match for later in the season, but this did mean that our season started off with an away match against the reigning league champions, Sarisbury.

Last year's matches against Sarisbury often left City wanting (see match reports here, here and here).  So how did we do tonight?

So Portsmouth City is not off to the best of starts but with 489 we still managed to shoot well above last year's team average of 486.7 so there is definitely cause for hope.  Many congratulations to Sarisbury for edging a win and well done to Matt Guille and Gordon Scruton for the possibles.

Special apologies go to Tom Sommerville, who on his first ever shoulder-to-shoulder match had to shoot in a borrowed jacket with an unfamiliar scope.  Sorry, Tom, I'll remember your jacket next time! :-) 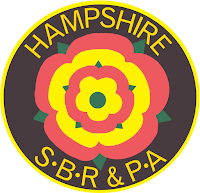 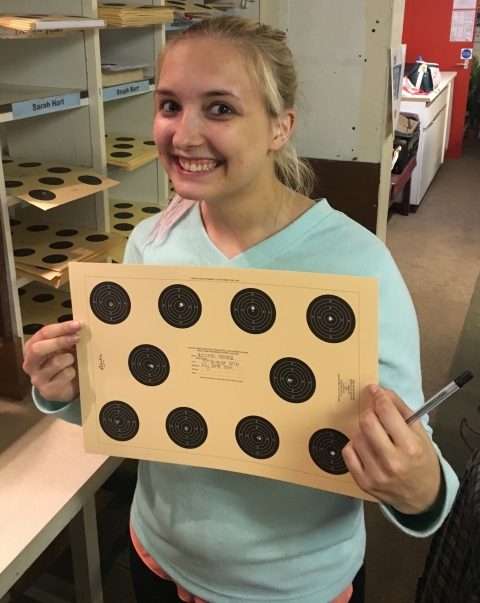 In preparation for the ELEY finals at Bisley (see part 1) a number of our shooters were keen to get a bit of outdoor practice in beforehand.  As a result, a few of us went up to Andover Rifle Club to enjoy a fine day of shooting on their outdoor range.

This was a Double Dewar match, meaning two cards shot at 50m and two cards at 100yds.  Each card has a maximum of 200 points on it, so final scores are out of 800.  The shooting is a little different from the standard indoor shooting, which we do at 25yds; the targets are further away but they are also bigger, and therefore because they are bigger, we can shoot more than one competition shot into each target.

So the upside of outdoor shooting is that there is less moving around from one target to the next.  The difficulty lies in changing light and wind conditions.

Owing to the fact that none of us shoot particularly regularly outdoors, this match represented a steep learning curve for those of us for whom this outdoor shooting was all new and those more experienced of us who had to remember what we were supposed to be doing.  It was a great competition that presented Tamsin and Matt with their first outdoor experience, and Jonny with his first 100 yds experience.  None of us did astoundingly well, except perhaps Tamsin, who proudly took away the Phyllis Green Trophy (top lady in C/D class).

A couple of City shooters, Gordon Scruton and Jonathan Rowe, decided to not just do the ELEY final but go up and do the whole weekend aggregate of the annual Bisley meeting.  This involved three cards at 50m and three cards at 100 yds, making a sum-total of 120 competition shots (thus 1,200 points in total).  This was an awful lot of fun and we'd encourage as many of you as possible to set aside the weekend next year to join us.  There was camping involved, BBQing and lots of the infamous 'Bisley wind' to throw the shots off.

Particular highlights in the shooting over the weekend were Jonny's high placing in C Class at 50m and, to a lesser extent, Gordon's placement in A Class for his 50m. 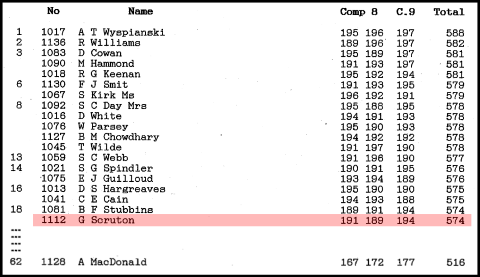 A little time after Bisley weekend, a few more shooters decided to go up to Buckinghamshire for a handicap shoot, this handicap was based on a shooter's declared average.  Much like handicaps in golf, this is a way for shooters with different levels of skill to enjoyably compete against each other.  This competition marked a couple more firsts for Portsmouth City shooters - for Mike McCormick it marked his first time shooting at 100 yards, and for Tom Sommerville it was his first outdoor shoot entirely.


No significant wins in this competition but it was a great, if slightly drizzly day and a fun time was had by all!

This annual competition marks one of the last competitions of the outdoor summer season.  A Scottish match is one that is only at 100 yards, and in this case was 60 competition shots.  Portsmouth shooters, Ian Cooper and Gordon Scruton took part in this competition, both in A Class, and while neither got close to winning the class (well done to Cliff Richards of Havant for that) it was pretty close between the two of them.

That's the end of the outdoor round up, but the next part of this summer report will look at the indoor postal leagues.
Posted by Gordon at 17:01 No comments:

It will not have escaped the notice of some of you that it has been some time since I’ve contributed to this blog – many apologies. Here’s a summary of how the club and its shooters have been doing over the summer:

Portsmouth City was proud to send 5 shooters to the NSRA/ELEY final this year. This was an excellent number to get to the 50m outdoor final from a total of 12 shooters who took part in the competition. For J. Rowe and M. McCormick, this competition was about besting their scores and standing compared to last year, while at the same time being in higher, more competitive divisions. While for the ladies, this was L. Haskett and T. Rowe’s first time shooting in these finals and thus their first experience of the infamous wind on the Century Range. 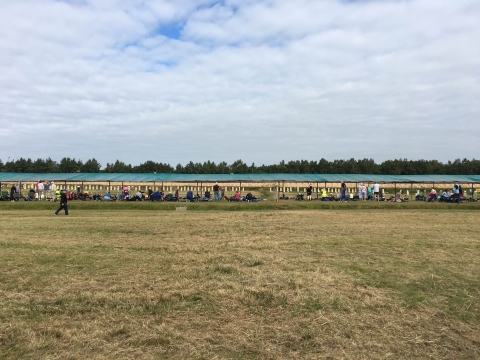 Here’s how everybody did: 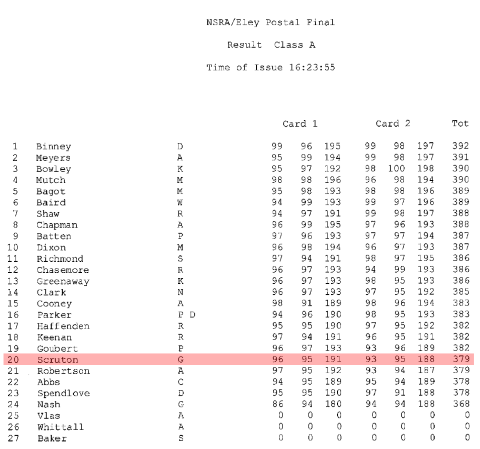 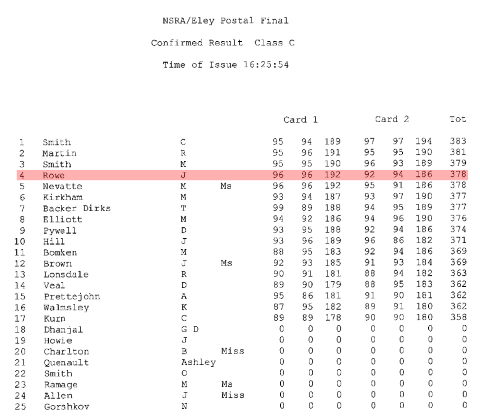 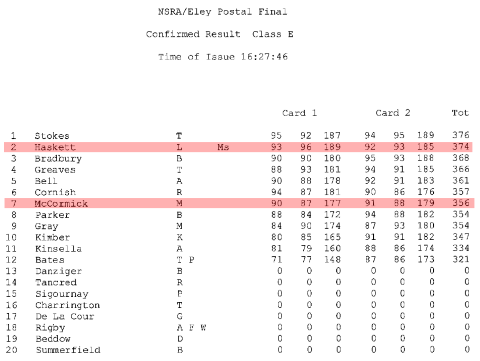 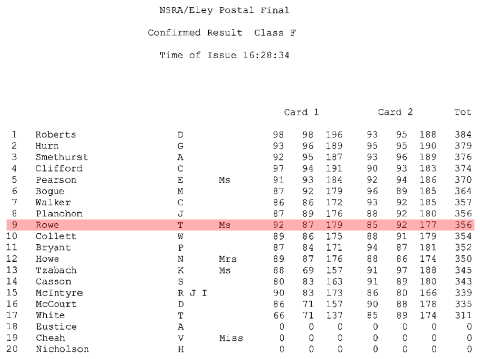 So overall it was a great Sunday afternoon of shooting for Portsmouth City.  The next post will stay outdoors and review some of the other 50m and 100yd matches that City shooters have taken part in over the summer.
Posted by Gordon at 17:13 No comments: