Spot takes one for the team... 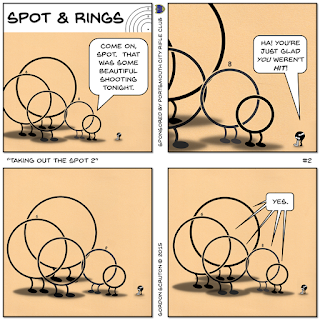 Click here to see full size.
Posted by Gordon at 17:38 No comments:

A couple of months ago several members of PCRC took part in a short 4-card postal competition run by our friends up at Cambridgeshire Target Shooting Association, Fred & Sandra Haskett.

Here's how the Portsmouth City shooters did in the 2015 Newmarket Competition:

Well done to everyone who took part.  We'll be back next year.

Come down to the range for a game of Tennis!

The above topic line might have you confused (tennis in a shooting range?).  Those of you who are not new to shooting may well know this game by another name, but I know it as 'Tennis' and it's a great way to keep practice a little more fun and competitive.

Here's how it works:

You need two shooters (A & B), one target, and one umpire.

Both shooters are given time to sight themselves in.  After this, a numbering of the 10 targets is agreed.  For example: 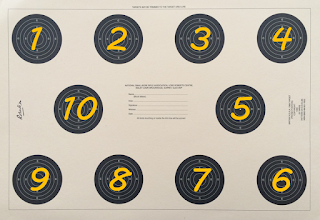 By virtue of a coin toss, A goes first.

The umpire randomly selects a target and calls out its number.

A shoots that target first, then B shoots the same target.

The umpire sees who has gotten closer to the bull and declares the winner of that target.

The umpire selects another target.

B now shoots first, followed by A.

The umpire declares the winner of that target.

This continues until all 10 targets are shot.

Shooters get 2 points per target won, 1 point for a drawn target and 0 points for a lost one.

Here's how it benefits your shooting:

It's easy to get stuck in a downward spiral and stop trying if you know the card is going to be a bad one.  This is a bad thing as what's important to remember is that a lot of this sport and some of its competitions are won or lost based on average - so for the sake of your overall average it's still worth making every shot count (even if it's a bad card overall).

Tennis is a great way to get into the habit of focusing on your current shot, not the one you've just taken or the one that comes next.  It's 10 one-shot games and once you've done one target you move on and focus on the next target.

It is possible to play a game of tennis without an umpire.  Providing both shooters have a spotting scope to see where their shots go, A selects the target, B shoots first followed by A.  This alternates from shot to shot until the card is finished.

The rules on most ranges are that you must be quiet on the firing point and not do anything that might distract a fellow shooter.  This being the case, Tennis can really only be played if the two competitors have the detail to themselves (or providing any other shooters on the same detail are comfortable with the talking required during a tennis match, but this is quite unlikely).
Posted by Gordon at 17:01 No comments:

This Sunday saw Havant host their annual Double Dewar competition.  A double dewar is two cards at 50m and two more at 100 yds - 80 competition shots in all.  I'm pleased to say that Mrs Marian Nevatte achieved 3rd Place in B Class.

Well done, Marian!
Posted by Gordon at 20:08 No comments: