Hampshire Postal Results are in!

Over the winter months, the rifle teams of Hampshire shoot against each other in postal matches.  Here's how it breaks down:

Portsmouth City entered 3 teams this season (our shooters are eager for the competition!) and I'm delighted to say that of the 210 cards shot, there were no NCRs (meaning No Card Returned; meaning unshot cards).

Our B Team (Lauren Haskett, Phil Upchurch, Steph Furness-Barr, Jonathan Rowe and David Owen) managed to pull themselves out of a mid-season slump and similarly achieve second place in Division 7 (Guernsey taking first place).  They also won 9 rounds and lost 5.

The shooters on our C Team (Lou Stafford, Mike McCormick, Adi Fallows, Dave Reeves and Mike Hellyer) have taken advantage of the experience in Division 10 to really hone their competition skills and while they only achieved 5th place, having won 8 and lost 6, we've seen the quality of their shooting improve in leaps and bounds and look forward to even better shooting from them in the coming seasons.  Well done to our sister club, Portsmouth Railway Rifle Club, for their C Team winning this division with 14 wins and no losses!

Competition within the club was fierce for the best average within the teams.  In the A team there was a tie this year between Sarah Hart and Gordon Scruton (both achieving a final average of 97.79).  Phil Upchurch achieved the best B Team average with 93.93, and Lou Stafford led the C Team with an average of 91.57.

We've thoroughly enjoyed this season of shooting and have seen a fantastic surge in achievement and energy amongst the teams.  We look forward to building on this in the 2015 summer leagues and, come next year's winter leagues, we hope that many of our newer shooters will be able to make up additional teams that will increase Portsmouth City's contribution to the regional competitions.
Posted by Gordon at 11:52 No comments:

One of our shooters has gone and shaved all his hair off for Macmillan Cancer Support - look! 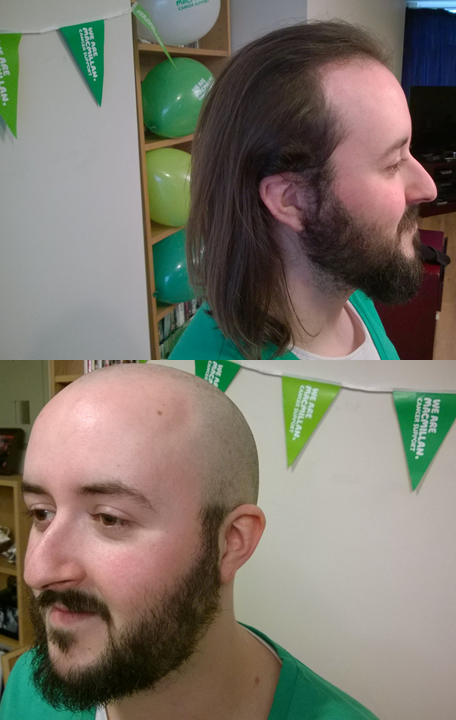 To read more about Jonny's connection with Macmillan and to donate, follow this link.

Jonny well done, a very brave thing to do - probably best to wear a hat on the firing point now. :-)

Previously, I mentioned that we had finished the winter postal league cards for the Civil Service Sports Council's Target Shooting Association, and that congratulations were due to Marian Nevatte who got the best individual average over the season (97.9).

Well we've now got the results in from the scores and I'm very pleased to say that our team (Ian Cooper, Adam Nevatte, Marian Nevatte, Gordon Scruton) won their division; and that Jonathan Rowe won his division shooting individually.

We'll be putting in a large number of members new to shooting into the Civil Service postal competitions this summer as it will be a great opportunity to increase their competition experience and, hopefully, we'll have some similarly good news come the autumn!

Portsmouth City Rifle Club finish the season on a high!

Tuesday night was our last match of the Portsmouth & District shoulder-to-shoulder season, against West Meon.  We've had a great season and, as a team, we should be (and are) very proud of our stats.  Thankfully, last night ended with another win.


So our final stats are as follows:

The competition for the best individual average was very close this year with 4 shooters all being within a few scoring points of each other:

Special thanks go to Marian Nevatte for being such a patient captain of the team, and to the following shooters for attendance and participation at all 16 matches:

We wait to see where the team will come in the overall standings, but regardless of that, we look forward to an equally enjoyable and rewarding summer season of shooting.
Posted by Gordon at 09:05 No comments: